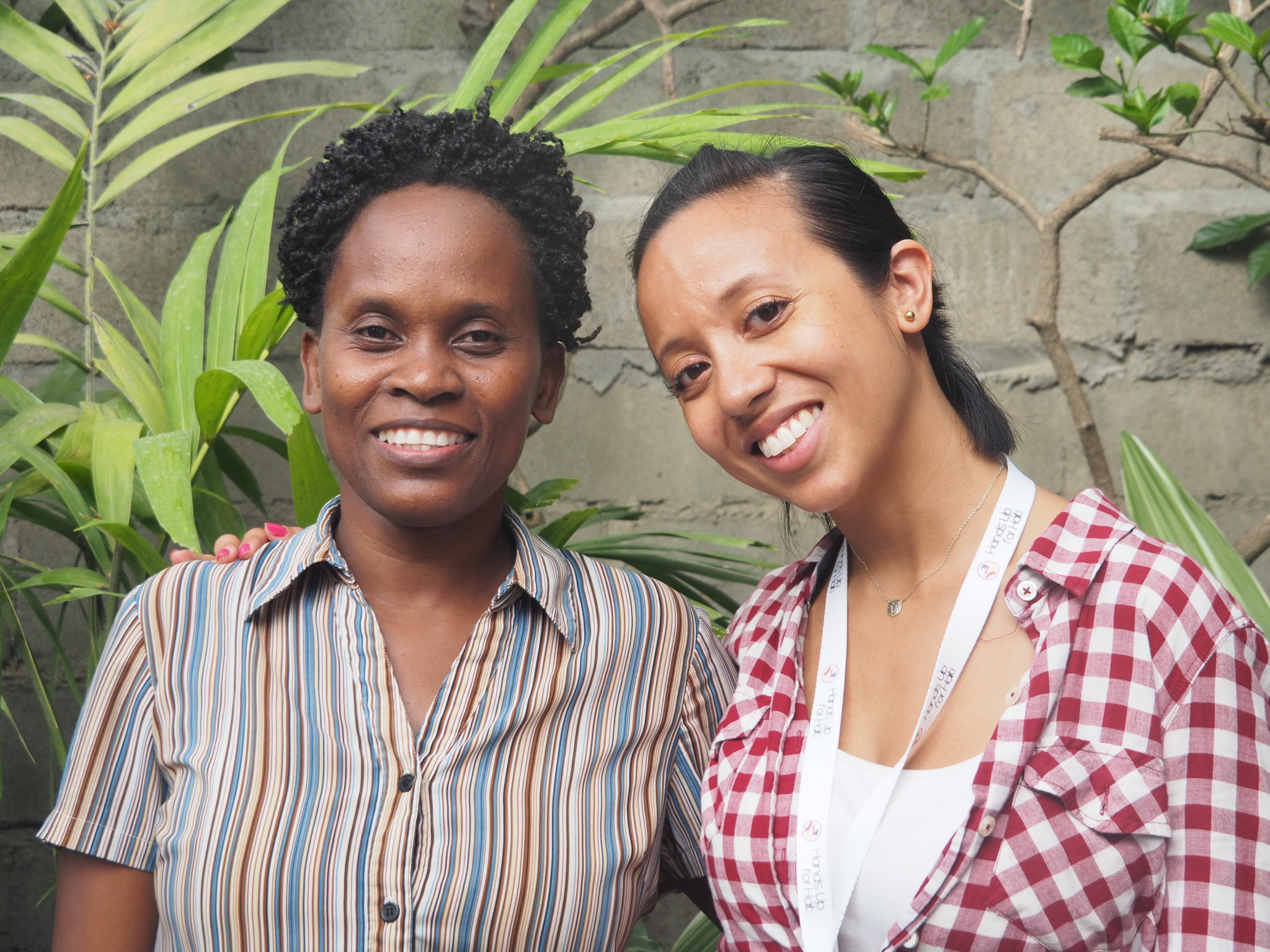 Dr. Liza Lizaragga was in her last year of residency at Morristown Medical Center in New Jersey when she traveled to Haiti for the first time last November with HUFH. The focus of the mission was to donate two portable ultrasounds to our partner hospitals and hold workshops on prenatal ultrasound techniques. Dr. Nelly Osias, who was completing her OB-GYN training at Justinien Hospital in Cap Haitien at the time, was one of the residents who attended the workshop.  As soon as Dr. Liza began her presentation, it became clear that the translator was not up to the task of translating the technical medical material.  Dr. Nelly jumped right in to help. The two young women doctors worked together for the next two days; an immediate and important bond was formed between Liza and Nelly that would lead to an incredible effort to save the lives of women in Haiti who were dying unnecessarily from cervical cancer. Nelly, on the right, jumps in to translate as Liza, left, lectures Liza and Nelly realized they had much in common. Liza explains, “We both grew up and trained in a developing country [Liza in Panama and Nelly in Haiti] and fully understood the struggles and health challenges that women, particularly those in developing countries, have to deal with on a daily basis.” After Liza returned to the US, the two continued to correspond, sewing the seeds for a collaborative cervical cancer project between Hands Up for Haiti and Haiti sans Cervical Cancer.

Cervical cancer is a deadly disease that if identified at an early stage can be prevented. Haitian women are at a disadvantage because their access to health care and basic screening modalities is limited. In the developed world, a PAP screening test and access to HPV vaccines have made this a rare cancer. In Haiti, it is the leading cause of death from cancer for women. Nelly and Liza realized this is an area in which together they could make a significant impact on the lives of many Haitian women and their families. Nelly adds: “During my training and my days of practice on cervical cancer screening I have received a lot of patients with different problem and dramatic situation. Some of them have been diagnosed at an early stage. Some others unfortunately have been diagnosed in advanced stages due to lack of information about the problem. A woman, age 55, came to me with advanced cervical cancer.  All we could do was give her medicine for pain. She is mother to seven children.”

Together with the help and support of Hands Up for Haiti and its benefactors they worked for nearly a year to establish a cervical cancer screen and treat program. In July, Liza returned to Haiti to work with Nelly and to continue the planning. They held a one day screening program and saw nearly 50 women.

Through collaboration and an ever-growing bond of professional respect and personal friendship, Liza and Nelly, under the auspices of HUFH and in partnership with Haiti Sans Cervical Cancer and GODOCGO, have just launched a small but very busy cervical cancer screening clinic in the town of Limbe in Cap Haitien. The plan is to screen 3000 women this year at this clinic site alone.

Dr. Nelly added:  “Our hope is to prevent those [advanced] cases by reaching out to all the women in this country in order to help them with necessary knowledge about gynecologic cancer and screen them on time to avoid such disaster. If we can set clinic for screening as well as reaching out through churches and other social group we can save our Haitian ladies. At first we will still have advanced cervical cancer stages because of the depth of the problem. However by working and teaching our ladies we know that will decrease considerably the severity of this problem. This will be possible by our willingness to help and with support of others since our country has limited resources.” Liza and Nelly in front of the new clinic in Limbe.

Liza and Nelly: Support, Collaboration and Partnership to save women’s lives and develop a sustainable health care system in northern Haiti.

Follow our blog for more on the launch and implementation of the Cervical Cancer Screen and Treat Program and our partnership with GODOCGO to help make this happen.

About Liza and Nelly:
Dr. Liza Lizarraga graduated from the Universidad Latina de Panama in the Republic of Panama. She moved to Morristown, New Jersey to complete her residency training in Obstetrics and Gynecology at Morristown Medical Center-Atlantic Health System. She also has a Masters Degree in Public Health from Columbia University in New York City and currently works with Hands Up for Haiti, running the cervical cancer screening program, which aims to see and treat early cervical changes that could lead to cervical cancer in under-served women in Cap Haitien, Haiti.

Dr. Nelly Osias graduated from Escuela Latino Americana de Medicina in the Republic of Cuba. She returned to Haiti where she immediately completed another one-year study in integral and general medicine with the Cuban physicians in mission in Cap Haitian. She then completed her residency training and is presently working in OBGYN at Justinien hospital. Willing to reduce the incidence of cervical cancer, she is now working with Hands Up for Haiti in screening and treating early cervical changes in women in the North of Haiti.