On both days, we set out early for our 45 minute hike to the village of Guiotant. We climbed up and down muddy hills and then walked on a long stretch of beach. 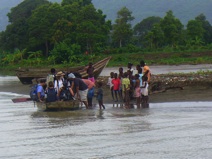 efore we got to the village we had to take small fishing boats across a river. This was quite an experience with bags of supplies and provided much amusement for the locals watching us get in and out of the boats.

We set up in the church, a small, poorly lit building, and used the pews for our stations. We had registration outside where Dennrik and Edward, another Haiti Village Health volunteer,, working with a translator and the local pastor took names and DOB and then found the previous records from the March immunization blitz if they had received vaccines.

A  nursing station was set up near the door,  Judy and Linda, our pediatric nurses, and the Agent Sante’s, local health workers being tr 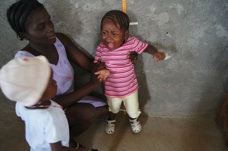 ained to run the clinics, did weights and heights,  temperatures and blood pressures where needed. We used a regular scale and had the mother hold the child and then the nurses subtracted the mother’s weight. Heights were measured either against a wall or on a pad on the floor using a tape measure.

We had three consult stations for the three doctors. A medical student and a translator were assigned to each one. Every patient was seen by the students under the doctor’s supervision.  If t

hey were just here for vaccinations, we indicated which ones on their records and sent them to the Vaccination station. If they had a medical complaint, they were evaluated, and treated. Referrals were made for dental, surgical, and follow ups with Dr. Brinvert at the BML clinic. The patients were then sent to the Vaccination station before going to the Pharmacy station to get prescribed medications.