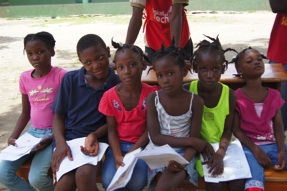 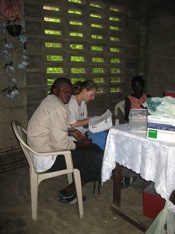 Vaccines were given by the Agent Sante’s under the supervision of Alysha, a public health nurse working at HVH, and Judy, our HUFH pediatric nurse. The vaccines were DPT, oral polio, and a Measles, Rubella combination. The vaccines for the day were picked up by Santos, HVH manager, in Limbe first thing in the morning. The challenges with the vaccines was keeping them cool and teaching the health workers how to properly prepare and administer the vaccines. 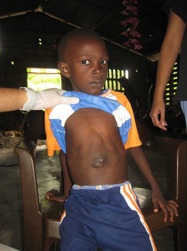 Our team saw over 100 children in Guiotant. The most common conditions we saw were infected skin lesions, stomache pain, respiratory symptoms such as cough and wheezing, pneumonia, and several cases of clinical malaria. We saw the common such as chicken pox and the exotic such as 6 year old Emerson St. Hillaire who has what appears to be an “ectopic Heart” , which would have been repaired in infancy in the United States.

The nurses tried to get accurate heights and weights and plot the weights on the government growth charts. Obvious cases of malnutrition were referred for further nutritional support. A program Medicine and Food for Kids using Medika Mumba, an  RUTF food is being organized in Bod me Limbe with the help of Hands up for Haiti. We distributed a month’s supply of multivitamins to all the families. 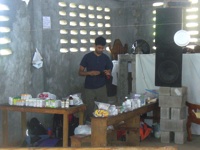 The pharmacy was staffed by a student and a translator. And drugs were organized and then dispensed using peanut butter and jelly, and mixing suspensions in the empty vitamin bottles. Almost everyone received anti-parasite medication .