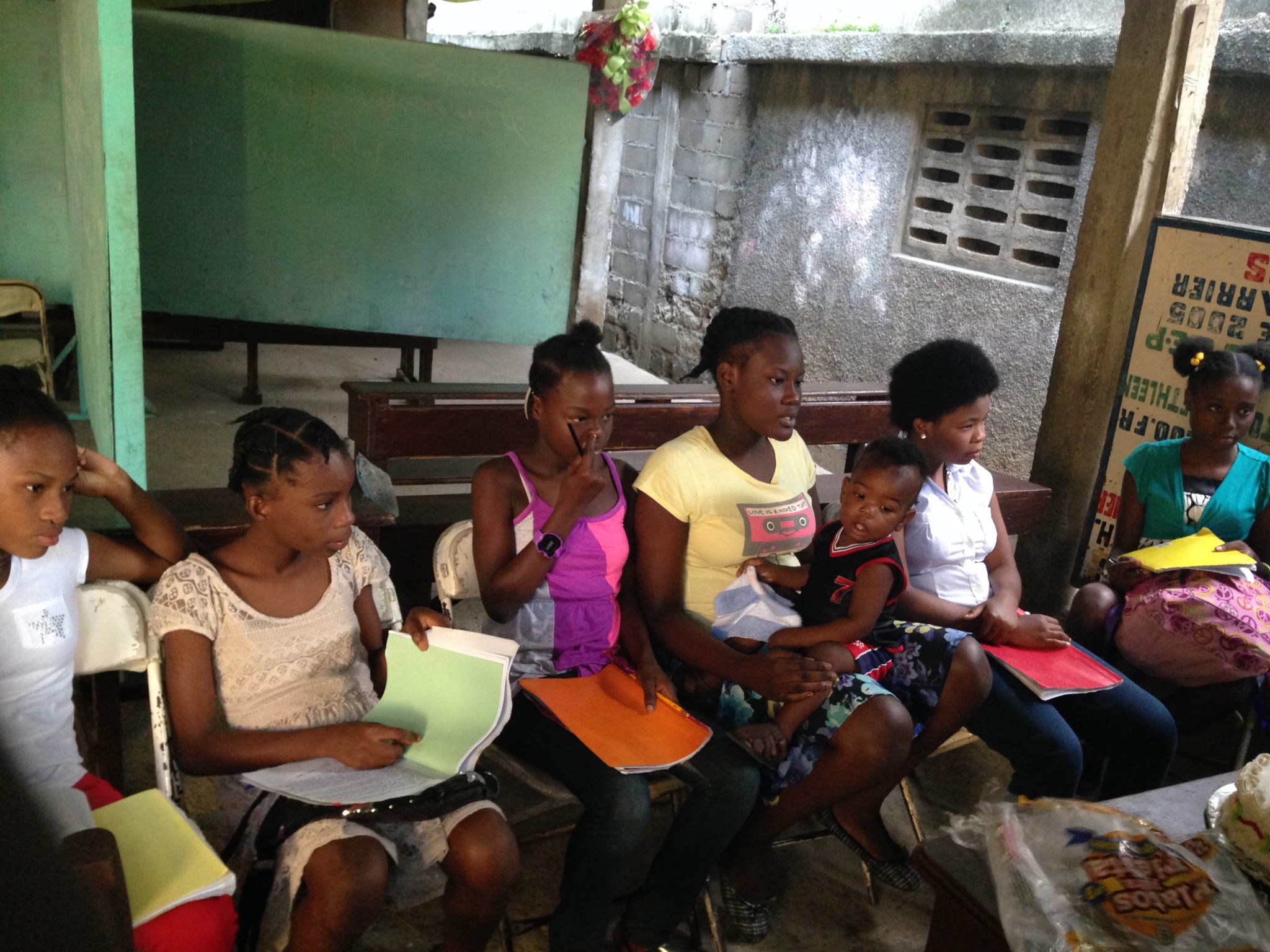 Andrea Feddes is a registered nurse from Canada, a HUFH volunteer and medical mission leader, who just returned from 9 weeks on the ground in Haiti with HUFH. Among her projects: a sexual health class for young women.

“What if we don’t learn about sexual health in school and our parents don’t teach us. How are we supposed to know how to protect ourselves against diseases if we don’t know about them?” One of my 14 year old students asked me this during our first class together. Since my first trip to Haiti in 2012 I have wanted to help educate the youth of Haiti on sexual health. The fact is, in Haiti there is no curriculum on sexual health. Parents don’t teach it out of fear of their kids knowing too much or because of religious objections, and the schools don’t teach it either. The truth I’ve learned is there is no such thing as knowing too much: knowledge has such power around the world; knowledge confers power and the ability to take care of oneself.

Guided by this belief, and with enough time during my recent 9 weeks in Haiti, I planned and taught lessons in sexual health to Haitian girls aged 13-16. I held weekly lessons in two different communities – with a total of 20 girls in my program. I followed the program  “For My Daughters,”. The book, written specially for programs in developing countries and available in Kreyol, discussed general reproductive anatomy male and female, puberty, menstruation, infections, sex and forced sex. I had all sorts of emotions on my way to the first lesson; I was really excited but also really nervous. I kept thinking “I hope they show up. I hope they are as excited about this education as I am. I hope they feel comfortable talking to me about these issues.” After about an hour and of waiting, 10 young girls showed up and we got started. These girls exceeded my expectations and the next class that week in a different community was just as amazing. I finished that week feeling so refreshed, on such a high from my experience. There is something about teaching and having your students so engaged, asking questions, and showing interest that is so fulfilling and exhilarating to me.

My lessons didn’t always go this smoothly or as I had planned. There was one week where we had to get out of the car and walk 15 minutes to our class because the community was holding a demonstration about their Presidential elections. Another time the road flooded after some heavy rains and most of northern Haiti was under water to some extent. With that being said, these were only hiccups in my experience and I learned valuable lessons from these hiccups.

I learned a lot from “my girls” as well. I learned about the power of education. I learned that when you’re teaching about STI’s, sex and rape in Haiti that likely one of the girls already knew about them because it’s happened to them before, even if they are only adolescents. I learned about the resilience that the people of this country go through each and every day. A lot of time “my girls” would show up late for class because it can take hours to get home from school, or they had to take care of younger siblings or neighbor kids, sometimes they had to cook meals for their family or go fetch water from the wells. No matter how late they were for class they always showed up. They showed up because they knew they had an opportunity to learn something different, an opportunity to in return help their families and friends to be educated. They showed up because they were interested, they had questions (really good ones) and they wanted to be there.

At end of the program we had a celebration. I bought the girls a cake and some candy, and I was able to give them a hygiene kit. These kits were made with help from a few special people back home. One of my favorite things in these kit was a handmade, washable sanitary pad or as they say in Haiti “Kotex”. Each kit had 5 or 6 Kotex inside that were fun colors and designs. Something so simple that we take for granted in North America had put huge smiles on their faces. Sandra (my amazing friend and translator) had told me half way into our program that she was sitting on her porch one afternoon and she could hear one of the girls in our class talking to the neighbor kids about the program. She had her book out and was teaching them about puberty. Going into this project my hopes were that these girls will go out into their communities, their schools, their families and friends and share what they’ve learned. Knowing that one of them had already started doing this gave me such satisfaction and joy.

To “my girls” thank you for showing me the power of education, the power that us as girls can have in this world and thank you for coming week after week no matter the circumstance to class with the eagerness to learn. You are all beautiful, smart and amazing young woman who I have no doubt are going to do great things and have such impact on others in your life (just as you have had on mine during our time together.)