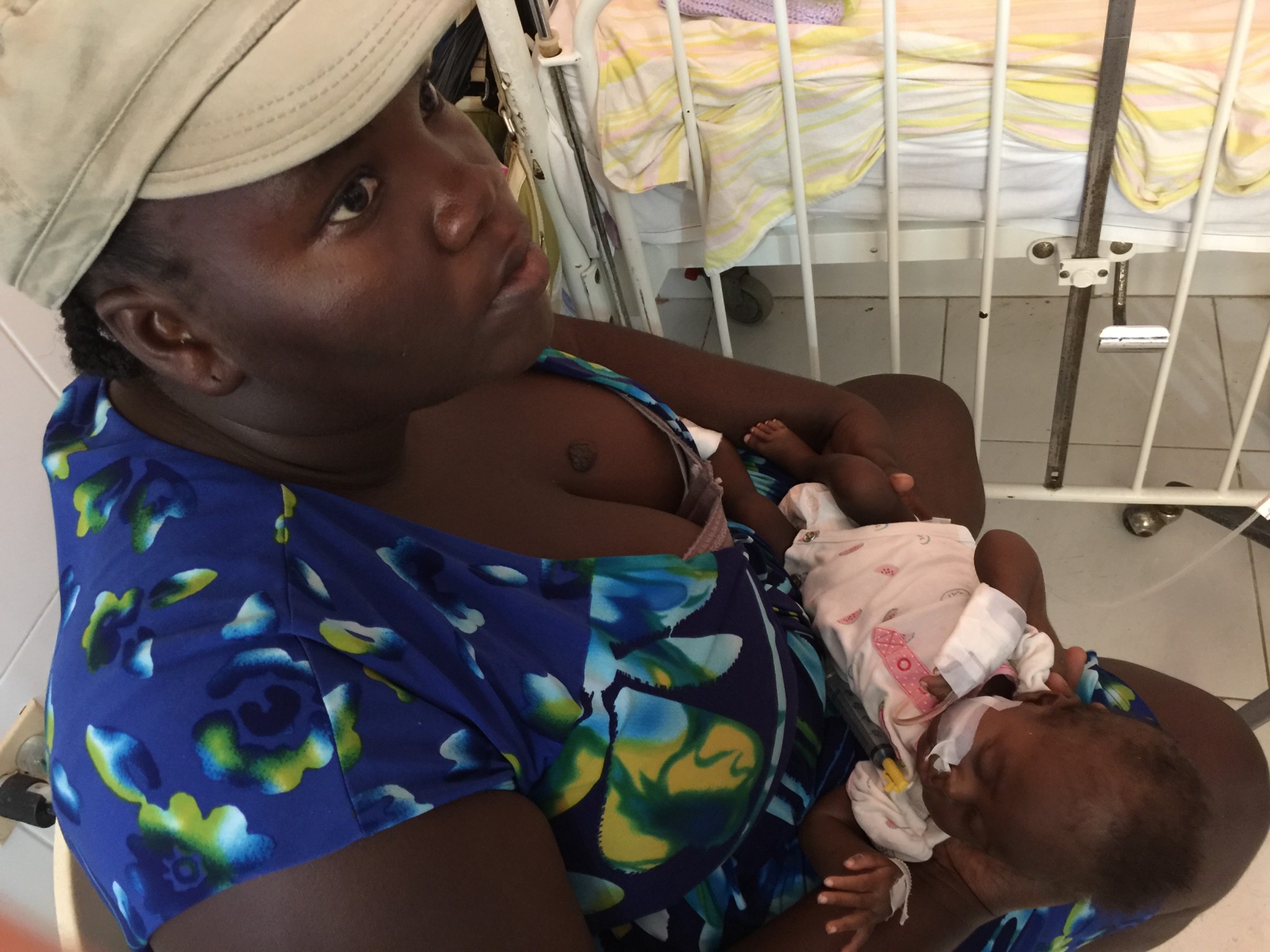 A young mother brought her 5 month old infant to the Open Door clinic where our medical team was working that day. She told us that the baby was vomiting and having trouble eating. One look at the baby and we knew this was serious.

An average 5 month old weighs about 15 pounds. This baby weighed 4 lbs 6 ounces, less than many newborns.

In developing countries like Haiti, where food is scarce and nutrition frequently poor, breastfeeding is strongly encouraged, as this gives the baby a much better chance of survival, but many new mothers do not know this. And for those who do want to breastfeed, there is little education about how to do it properly and how to get a good milk flow right from the beginning. When breastfeeding fails, infant formula is not easy to get and babies often get poor substitutes causing severe malnutrition. In Haiti, 59 of every 1000 babies born die before their first birthday; one in five children under the age of 5 suffers from malnutrition.

This young mother was trying to do the best for her baby, but had not been able to successfully breastfeed her baby boy. She was feeding him whole cow’s milk and mashed bananas, a diet she believed appropriate because she had never been educated properly on the nutritional requirements for infants.

Lying on the exam table, the baby had a desperate stare and a weak cry. He had no baby fat and his ribs stuck out prominently from his chest. The baby looked hungry and the mother looked hopeless. The baby was dehydrated and malnourished and needed immediate medical and nutritional care. Using funds in the HUFH Follow-up and Surgical Care fund, we transported him to Hopital Convention Baptiste d’Haiti, one of our partner hospitals, where he was admitted to the pediatric ward and started on NG (nasogastric) feedings with infant formula. The NG feedings let the baby absorb the calories and nutrients from the infant formula without having to do the work of sucking and swallowing, work he was too weak to do. They also placed an IV line for additional hydration.

Within 24 hours of hospitalization, the baby was rehydrated and looking stronger. The NG feedings will continue until he is strong enough to drink the formula on his own. We could see from the expression on his mother’s face that the worry that her baby would not survive another day was now replaced with relief that her baby was going to live, and with the hope she now has for a healthier tomorrow for herself and her baby.

HUFH has led an education effort to prevent malnutrition in infants by educating moms in prenatal clinics about the need to breastfeed their infants for at least a year and to learn the proper techniques for breastfeeding after the baby is born. Our Haitian staff has led this effort in Shada, where we see a tremendous number of malnourished children, and at our other prenatal and malnutrition sites.

We see a person suffering and show her that someone cares. Together, we are all part of a shared humanity.

To support the malnourished children of Haiti and their mothers, please donate here.

Replacing Despair With Hope: The Faces of the Mothers of Haiti